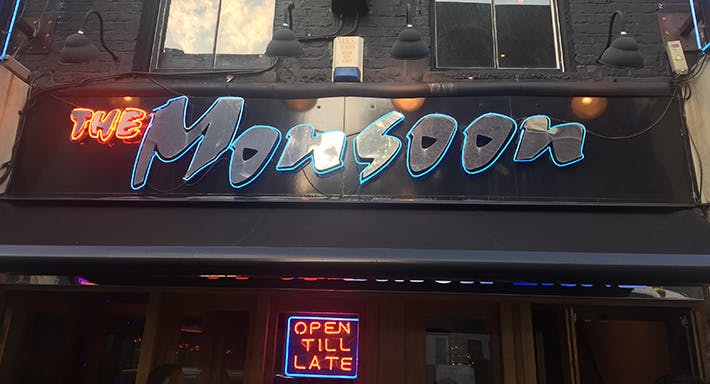 More about the restaurant: The Monsoon

The Monsoon is an Indian restaurant in London’s East End that has ridden out many a storm. Founded in 2001 by Shams Ud Din, The Monsoon is the epitome of this long-standing Brick Lane community leader and restaurateur’s efforts to bring proper Bangladeshi cuisine (not what has been historically described, self-effacingly, as just Indian cuisine) to the broader London public. A fascinating example of how something we take for granted – food – can be central to crucial debates about cultural authenticity, and simply a great place to enjoy delicious meals and lavish banquets, The Monsoon is a shining light in the Spitalfields and Banglatown dining scene.

Thinking about making a The Monsoon booking?

Proprietor Shams Ud Din grew up through the East London ructions of the 1970s and 1980s, observing how the clash of cultures between the wealthy City riches and the relatively marginalised Tower Hamlets community gave birth to a Banglatown renaissance that, to his mind, was a double-edged sword. On the one hand, South Asian culinary culture became widely accepted in London, with the East End and Brick Lane in particular becoming known as a hotspot for those seeking this kind of cuisine. On the other hand, Shams saw the burgeoning restaurant scene catering to a naive understanding of South Asian regional differences, resulting in all these distinct strands and styles being gathered collectively, homogeneously, under the general term Indian.

In response, Shams founded The Monsoon as a restaurant with a mission, determined to serve authentically Bangladeshi cuisine. Let’s get educated. Given Bangladesh’s riverine interior and stunning coastal environment, The Monsoon’s fish dishes are supreme representatives of this restaurant’s distinctive offering. Try the fish katli, shobji fish, or the adrak ki mass. Even more close to this East London South Asian restaurant’s heart are the Bangladeshi specialties, most of which typically involve green chilli, coriander, native spices and the seeds of the Bengali runner bean. Again dominated by seafood, the king prawn gatta, prawn shatkora bhuna and the shatkora mas biran are our picks. Brick Lane loyalists will want to check out the chef’s specials, with colourful dishes laden with giant prawns from the Bay of Bengal cooked in a tandoor and simmered in spicy red masala sauce for the golda chingri londoui. There’s plenty more meat and vegetable delicacies on offer here, and don’t forget that The Monsoon offers some of the most opulent and authentic banqueting events in this crowded corner of Spitalfields’ dining scene.