A Room In Leith Seafood and Game Bistro Bar 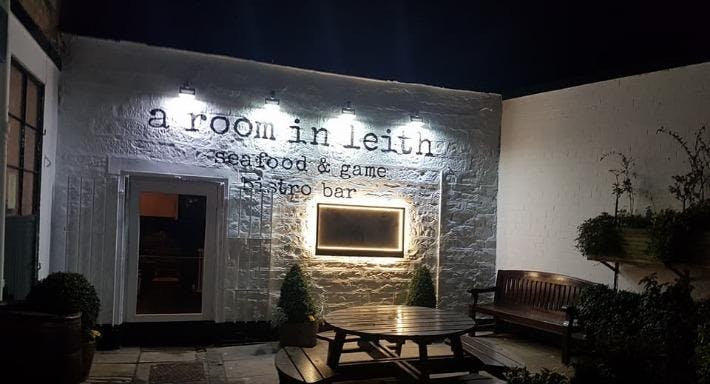 About A Room In Leith Seafood and Game Bistro Bar

The latest addition to Peter Knight and John Tindal’s burgeoning line of Scottish bistros and whisky bars, A Room In Leith is, well, a bit more than just a room in Leith. A room in Leith, indeed, where one can can sit down to sample what it is that makes Scottish cuisine great: fresh, local ingredients, seasonal products and culinary nous. Head down to Dock Place, just yards from the Water of Leith, to find out for yourself.

Leith is famed for many things, some more salubrious than others. The docks and port that served an Empire, the ‘characterful’ pubs of Leith Walk, Scotland’s most consistently useless football team – against strong competition in that regard – over at Easter Road. This combination of maritime prowess, a dubious relationship with alcohol and gloriously predictable sporting failure is Scotland in microcosm, and at A Room In Leith, one can enjoy Scotland on a plate. Their ingredients down on Dock Place are fresh and local, their whisky selection is among the best in Edinburgh and their knowledge of Scottish cuisine is unparalleled.

When we say that A Room In Leith have a superb knowledge of Scottish cuisine, we weren’t lying. Their menu is packed with dishes that exemplify the breadth of flavours in Scotland: from the north, Stornoway black pudding and Shetland scallops, from the south, Borders steak; from the west comes Ayrshire pork belly and from the east coast, North Sea monkfish. The whole of Scotland comes to Edinburgh – specifically Dock Place in Leith – to dine.