Find other restaurants in London 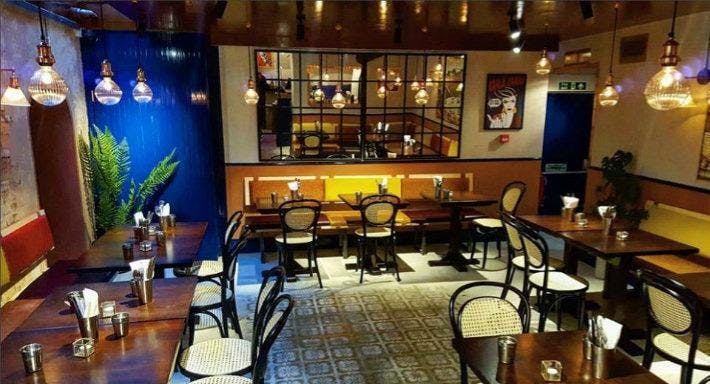 DUM Biryani House London has the admirable accolade of being Soho’s very first biryani house, and what a title that is! From its central location on Wardour Street, DUM Biryani House serves up all kinds of biryani alongside other excellent Indian street food specialities and curries. The name ‘dum’ refers to a precise cooking technique where meat and vegetables are layered with rice and steamed together when making biryani. Resulting in seriously melt-in-your-mouth food! Plus, all the biryanis at DUM Soho come with spiced okra yoghurt, pickles, papadums and a portion of aubergine peanut curry to really seal the deal. Advance booking is recommended to avoid disappointment!

Our Kachche Murgh (Chicken) Ki Biryani is made by layering the marinated chicken and rice and cooked in a sealed pot for over two hours. Served with aloo raita and papads.

All of the servers had an attitude and were really standoffish. Our waitress seemed genuinely surprised and affronted when we asked about the menu or for more drinks. Food was dry and I ordered the vegetable biryani which was supposed to contain "seasonable vegetables" but was actually just dry rice, paneer and green beans. Drinks were good but v expensive for a half full glass. Took 20 minutes to ask someone for the bill and when it came, noone came over to collect payment. When we finally got someone's att nation, they said "well you pay at the counter, there's no card signal in here". Would have been nice if they'd said that rather than leaving us in there for 15 minutes and looking at us like we were stupid.

Great food! May be a tad bit expensive for what it's worth

As always, really delicious food. The flavors are incredible and I highly recommend the desserts!